Home News More than 21,000 people call for action on ocrelizumab for Primary Progressive MS in the UK

More than 21,000 people call for action on ocrelizumab for Primary Progressive MS in the UK

More than 21,000 people have signed a petition launched by the MS Society UK, calling for ocrelizumab to be made available for people with Primary Progressive MS.

The petition, urging them to take action, was delivered to the National Institute for Health and Care Excellence (NICE), the National Health Service (NHS England) and drug manufacturer Roche,

Hundreds of people diagnosed with no treatments available

Ocrelizumab is the first treatment licensed in Europe for Primary Progressive MS. But in September NICE – the public body which determines whether medicines will be available on the NHS – announced it would not be recommended for use.

Since then, roughly 250 people in the UK have been diagnosed with primary progressive MS with no treatment available to them. And that number is increasing.

Ocrelizumab can be paid for privately, costing at least €22,000 per dose (there is a specific schedule of treatment). We know this is simply unaffordable for most people living with MS.

“It’s so frustrating that I can’t have it”

Holly was diagnosed with primary progressive MS in March 2018. Since NICE rejected ocrelizumab, her condition has deteriorated rapidly.

She says: “When I was first diagnosed I was just having problems with my right leg but now it’s my left as well, which is really affecting my ability to walk. My bladder problems are getting worse too, and I’m having more and more accidents.  “It’s so frustrating to know there’s a treatment that could slow all this down and perhaps change things for me, but I can’t have it. The toughest thing is not knowing how to plan for the future. I’m still young and I want a life and kids, but I have no idea how bad things will get.

“The fact people like me are being denied something that could help us stay as we are – even if just for a few years – is devastating.” 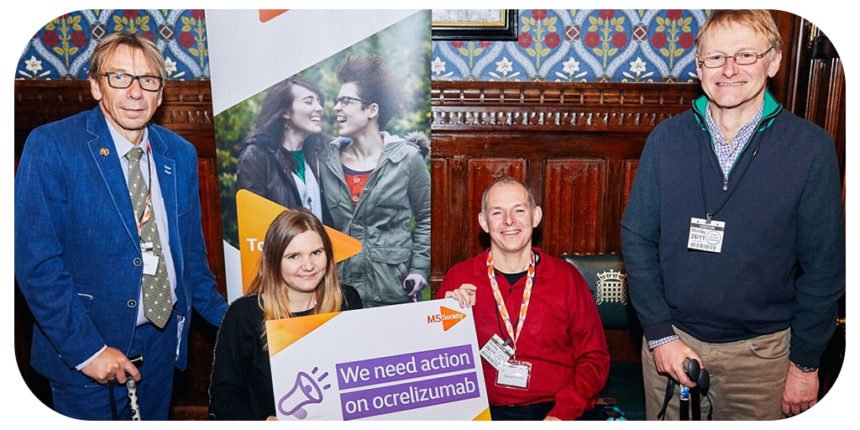 It’s vital they reach a deal

Genevieve Edwards, Director of External Affairs at the MS Society UK, said: “Living with primary progressive MS can be painful and exhausting, and there’s finally a treatment that could help.

“With the potential to delay the need for a wheelchair by seven years, ocrelizumab offers people hope for a better future. But right now, thousands of people are being denied that opportunity….“NICE, NHS England and Roche could put this right, so it’s vital they reach a deal. This could be life-changing for thousands, and more than 21,000 agree – ocrelizumab must be made available to everyone who could benefit, at a price the NHS can afford.”