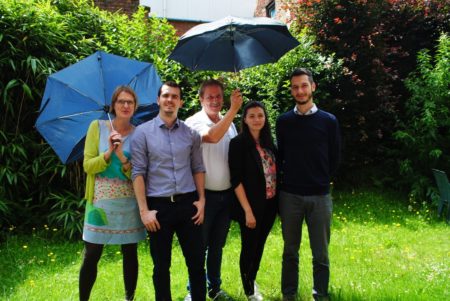 EMSP marked World Brain Day 2016 by lending our support to our traditional partners from the European Federation of Neurological Associations (EFNA), as well as to a newly formed patient organisation in Romania.

Celebrated each year on 22 July, World Brain Day provided EFNA with the opportunity to step up their awareness-raising efforts on the impact of brain disorders.

1 in 3 people worldwide will be affected by a brain disorder in their lifetime – this is the leading message behind EFNA’s campaign Together Under the Umbrella aiming to increase public, political and scientific support for all brain-related disorders and help reduce the associated stigma.

EMSP answered EFNA’s call and we showed our support by literally getting under the umbrella (pictured below) and inviting our social media followers to do the same. We advocate on behalf of 700,000 people living with multiple sclerosis (MS) in Europe. EMSP was also represented at an awareness-raising meeting organised in Bucharest, Romania by the Association of Patients with Neurodegenerative Conditions (APAN). Healthcare professionals, patients and patient advocates, industry partners, policymakers and the media were all present.

“The mission of APAN is to improve the quality of life of people with neurodegenerative conditions but also to be the main source of information for the population. We want to empower patients and caregivers”, said APAN’s Vicepresident Cristina Vladau. EMSP’s Public Affairs Coordinator Andreea Antonovici (pictured, left) is one of the founders of this newly formed patient organisation.